Pastry and confectionery shop Caredda at Josefstrasse street has brought Italianità to Zurich for twenty years. 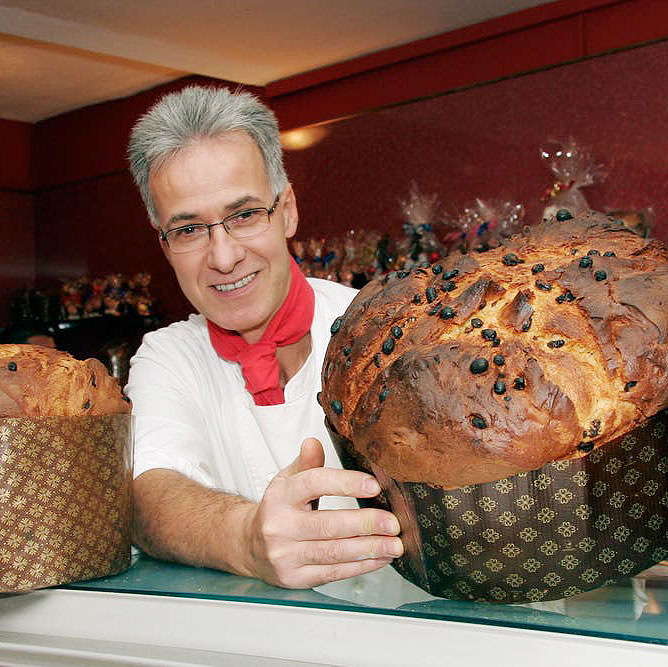 “I was born in a bakehouse”,

Paolo Caredda said. This is not meant to be taken literally. Still, at his parents’ pastry shop in Ischia, where he grew up with his three brothers and seven sisters, he had always been fascinated by the world of sweet temptation from a very early age. He was sent to Switzerland to learn the trade already as a teenager. The source of inspiration for the island was nearby Naples, whose multicultural past was reflected in heavenly desserts, like in Sicily, the stronghold of the cannoli and of marzipan.

“I was lucky enough to make the acquaintance of the crème de la crème of the pastry scene”, Paolo stated. For instance, he met at an early stage Willi Pfund, a decorator with Sprüngli, who also ran the first sugar decorating training course in Zurich. Furthermore, he met Ewald Notter, the world’s best chocolatier at the time, who ran another training course at Josefstrasse street in Zurich, and Fredi Eggenschwiler, an icon of Swiss pastry chefs. Paolo learnt from all of them.

In 1998, when he opened his shop without previous advertising, there were just under ten people present. According to Paolo, the real boom started only a year later. He said this had been like an engine running non-stop. To this day, he stays in the bakehouse for twelve hours seven days a week.

Paolo prepares his Neapolitan and Sicilian specialities according to his own recipes, which are actually no secret, as he allows each apprentice to make notes but after that must never ask again. “Even if everyone has the same recipe, after that everyone will still apply it in his own style”, Paolo said.

This portion of Italy is well appreciated in Zurich. Paolo is very pleased when people find his pastries are the very best outside the boot.

You are welcome to visit our shop.

Whether bread, pastries, our popular dolci italiani or the unique cakes, everything is well-known all over town.

We are the cake makers: wedding cakes, birthday cakes or cakes for other celebrations and anniversaries.

There is a fine menu every working day, prepared with love, plus something sweet.

According to the daily newspaper Neue Zürcher Zeitung, our handmade panettoni are the very best in Switzerland.

Opening hours of the pastry shop

locations in Zurich and Jakarta.

kg of chocolate each year.

All made by hand.

Cherry cream with almonds and chocolate.

We are the cake makers from Zurich and Jakarta. All wishes can be fulfilled.